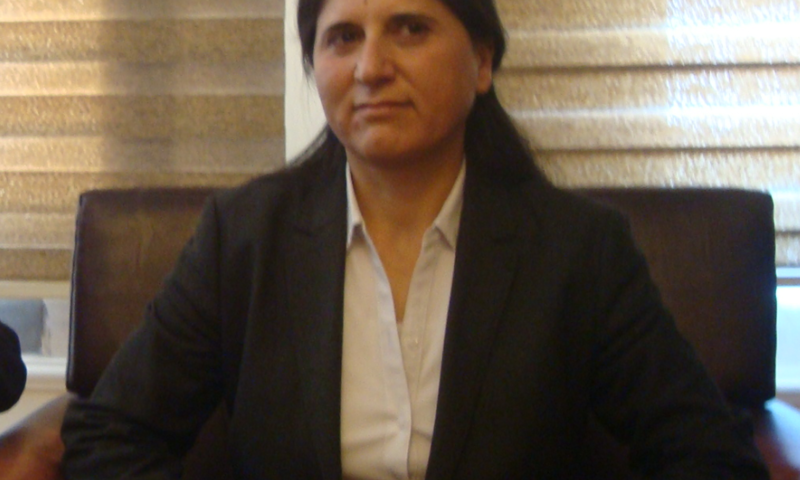 An interview with Asya Abdullah, the coordinator of Kongra Star.

We want to talk to you today about the women’s revolution in Rojava. But at first want to know how the situation of women in Syria was before the Rojava Revolution? For example, was it possible for women to organize independently under the Baath-regime?

The Baath-regime under the Assad family represents a centralist, authoritarian and patriarchal system. It is designed to control the entire society, especially women. But women’s organizing in Syria has actually a long tradition. Women’s associations have existed since 1915. After the transition to the republic, the Syrian Women’s Union was founded as a women’s association of the Baath Party. However, the members of this union had to be members of the Baath Party as well. In 2011, we as the Kurdish women’s movement tried to establish some registered social women’s associations. The necessary registrations have been made for this. However, we were told that in the case of founding an association, our members had also join the Baath Party as a legal obligation. The purpose of this was clear. The organized women were to be kept under the control of the regime. Therefore we withdrew our registrations at that time.

The Baath Party’s attitude toward women was very benefit-oriented and pragmatic. For example, when a women’s organization held its congress, the opening speech was given by a man. So for women who wanted to organize, there were two options: Either join the Baath Party or organize illegally. Illegal women’s organizing, however, could bring repression. For this reason, dozens of opposition women have been arrested.

However, despite the possible repression, women in Rojava have been organizing. Can you divide this organizing into different historical stages and tell us what distinguished them?

The history of the modern Kurdish women’s movement in Rojava and Syria can be divided into three stages. In the first stage, classical “front work” was conducted. That is, women organized in the spirit of supporting the national liberation struggle.  But women did not only organize for national liberation, but also, and especially, for gender liberation. The fact that the philosophy of Abdullah Öcalan spread among women, had a very great influence on the whole society. In 1990 and the following years, the number of people who joined the movement suddenly skyrocketed. In the early 1990s, young people from at least 80 percent of Kurdish villages joined the armed liberation struggle. Especially the number of women who went to the mountains increased. Of course, this also had repercussions in society.

Before the women went to the mountains, they did grassroots organizing and educational work with other women. They held village meetings, talked about the philosophy of Öcalan and women’s organizing. The first separate women’s meetings started in 1991. The women cadres went from village to village, from house to house and talking about Öcalan’s ideas regarding women’s liberation. Of course, this did not go without problems. There were many obstacles to overcome: One the one hand from the Syrian regime, but also from reactionism within society. Both state oppression and anti-propaganda did not make it easy for the women of the early days to organize society. Some women had to fight against their families, especially their fathers and brothers, to join the struggle. But the obstacles were overcome with great willpower.

Kurdish political parties had existed in Syria since 1958, most of which operated illegally. Within these parties, the influence of women was minimal. They were led by men. The prejudice that women could not work illegally because they could not keep secrets was widespread. Women supported their parties in any way they could but were not part of the decisions. For example, when meetings were held, women kept watch outside. Even today, many parties have not really changed in this regard. Because of the revolution, the parties also must accept and also implement some changes, for example, when it comes to political representation and participation of women.

The second phase of the Kurdish women’s movement in Rojava started in 2005 with the establishment of Yekitiya Star, the first Kurdish women’s organization in Rojava and Syria. Together with Yekitiya Star, the women’s movement gained its organized character. From now on, women’s work was conducted according to a program, with specific goals and in an organized way. At that time, the state repression was very strong and many women were arrested. Moreover, a special war was led by the regime against the women’s movement. The regime tried to attack the women’s movement through the values of society. In Kobanê, for example, where the population still thought relatively traditionally, leading members of our movement were transferred to Aleppo for questioning. Some were arrested. For example, Ayşe Efendi, the former co-chair of the Kobanê People’s Council and wife of Salih Muslim, was imprisoned there for a year in the early 2000s. The fact that women were transferred to the big city by state forces without male escort, questioned there and imprisoned was intended to make society prevent its women from engaging in political work. In addition, if a woman was arrested, she was denounced by the state as a traitor, even though she had not made a confession or betrayed her female comrades during her interrogation. Some women were imprisoned to make an example of them. The state intelligence service did everything to tarnish the image of politically active Kurdish women. Some women disappeared under state custody. For example, Heval Xelat, originally from Derik, was arrested in Êfrin in 2004 and has since disappeared.

There was not one political action at that time that was not attacked by the state. Not one action ended without arrests. But still, the participation of women in actions was very strong. In terms of numbers, it was even stronger than that of men. In 2004 and 2005, the state repression in Êfrin was very strong. However, for us to be able to carry out actions there, older women traveled from Aleppo to Afrin. Kurdish women faced any dangers to continue their struggle and resistance.

For this reason, we as women were able to move towards the revolution in an organized way very early. Because even before the revolution, we had established an organized base. As Yekitiya Star, we had our own organizational system even then. We were organized everywhere, both in the Kurdish cities and in the Syrian cities. We had our women members, our assemblies, our resolutions, and our social network. In addition, even before the revolution began on 19 July 2012, as Yekitiya Star, we had held extensive discussions about how we wanted to shape the revolution that we saw coming. One strategic decision we made at that time was that we wanted to organize as a women’s movement everywhere, even in mixed structures, with our autonomous identity. For this reason, women played a leading role when the Rojava Council was formed. At the PYD congress in Qamishlo, we moved to the co-chair system. We also prepared in our structures to build autonomous defense structures. This and much more contributed to the fact that women were in the vanguard from the very beginning of the revolution. It has not been that the revolution started and then we took our place in it. Even before the revolution, women played a leading role in building the system. Women were not only participants but founders of this revolution. This both strengthened and enlarged their role, and made their burden more difficult.

You have already talked a little bit about the role of women in the Rojava Revolution. We would like to know from you again in which areas and in which form the women have enriched the Rojava revolution?

Women have indeed greatly influenced all areas of life and struggle. For example, they have played a leading role in the transition to education in the Kurdish language. Even today, women are the majority in the education sector. In some areas, we as women have been able to liberate ourselves from a subordinate position. The liberation of society and women have not been separated. We have never said that one is more important than the other but have always emphasized that they are mutually dependent. Above all, the self-defense struggle led by the Women’s Defense Units of the YPJ has been instrumental in advancing the Rojava revolution in the form of a women’s revolution. For the first time, an autonomous organization of women has been established in the field of defense and security. This has strengthened our autonomous identity as women. The leading role of the YPJ in the defense of the revolution and our democratic system has greatly influenced women not only in Rojava and Syria, but all over the world. The co-chair system has removed the assertion that the genders are not equal. The principle of co-presidency represents a great step for the democratization of society and our political system. It has turned into a norm and influences society and family. We women have organized ourselves in the municipalities and councils both mixed and autonomous. From the autonomous system we went to the mixed structures. This has led to a strengthening of the social structures as a whole. More and more women have thus participated in the struggle, which is based not only on resistance, but even more on building alternative social structures.

Another very important point is the role of women’s laws. These are based on the idea that we, as women, have to make decisions that affect us ourselves. Normally, laws usually serve the interests of men. We have built our justice council. We have institutions that are responsible for monitoring the implementation of our justice principles. This is another area of everyday struggle. Because in some places during the revolution, not only was Syrian state law in effect, but Sharia law was in effect at the same time. Moreover, clan law is very strong in many places and prevents us from implementing our social contract and women’s rights. Therefore, the revolution is a process of gradual change.

The achievements of women in Rojava are undeniable. At the same time, they are exposed to multiple attacks and various sides. Can you tell us how you as women defend your achievements?

The achievements of the women’s revolution have been attacked many times and even today we are facing great dangers. Not only IS has implemented feminicide, but feminicide is also taking place in the cities occupied by Turkey today. Any achievements of the women’s revolution are to be annulled. With this aim, plans for further attacks are being made on the part of the Turkish occupation state.

We women have a double responsibility when it comes to defending and expanding the revolution. In doing so, we rely first and foremost on our consciousness. The struggle for the transformation of men is also primarily our responsibility. Society is transforming and liberating itself under the leadership of women. Today, thousands, even tens of thousands of women are actively involved in the revolution. In education alone, there are 12,000 women teachers. Women also outnumber men in the health sector. This means that tens of thousands of women have left the four walls of their homes and taken responsibility in building society. The Rojava revolution is an ongoing process and women play a determining role in it. This is unprecedented in the Middle East.