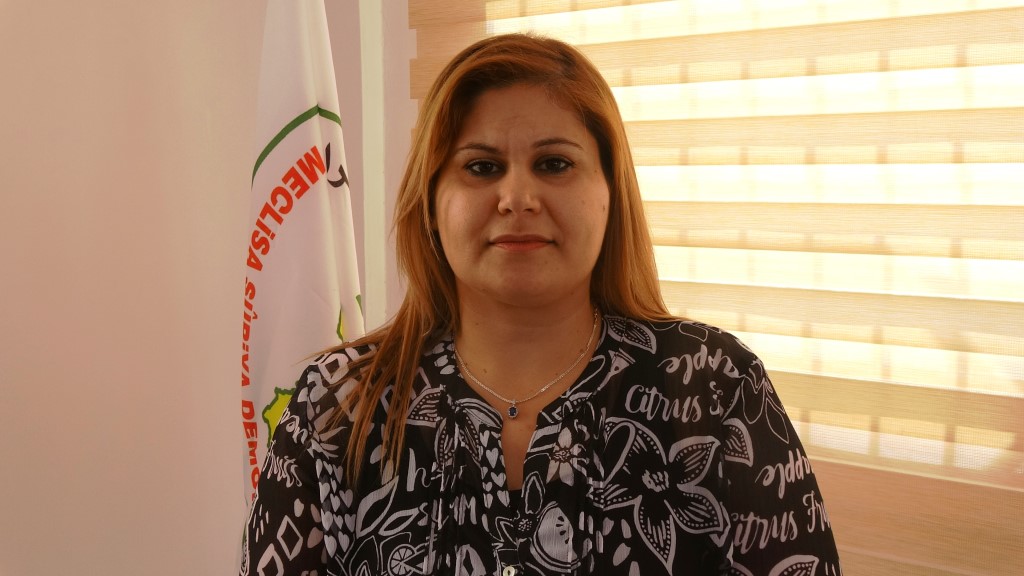 Interview with Nisrin, representative of the Education Council of the Cizîrê region (?)

With the Rojava revolution a new education system was established in North East Syria. Today, there are not only Arabic schools in the region, but also Kurdish and Aramaic ones. Could you tell us what the school system is like? How successful is the education system and with what difficulties do you have to deal with?

Every person and every child should have the right to receive education in his or her mother tongue. We are trying to realize this right and currently offer schooling in three languages: Kurdish, Arabic and Aramaic. In the first three years, all school subjects are taught only in the respective mother tongue. From the 3rd grade onward, the children learn another language of the local population, such as Kurdish, Arabic or Aramaic. From the 5th grade, they can then choose a third language. In most cases, English is chosen.

Our education system works well and so far we have not had any major problems due to multilingualism. However, in rural areas it is sometimes difficult to find teachers of the native languages for all school subjects, including physics, chemistry and mathematics. Due to the attacks and financial problems, many people fled, including teachers from rural areas. Another difficulty is finding Kurdish teachers for native Arabic speakers who want to learn Kurdish as a second language and live in areas where there are just few Kurds.

One of the biggest problems of the education system is that we lack Kurdish textbooks and dictionaries, especially for the subjects of mathematics, physics, chemistry, geography and philosophy. Novels, history books and poems, on the other hand, are plentiful. For a good education in Kurdish, we need thousands of dictionaries and textbooks. In this challenge, our school system urgently needs outside support.

The difficult economic situation and the embargo are also reflected in the education sector. Because of this, it is enormously difficult to provide equipment needed for good teaching, such as computers, projectors, but also laboratories. Even the power supply in the schools can sometimes become a problem.

In addition, we have a shortage of school buildings. We also need to renovate the existing schools so that the children can be taught in safe and child-friendly rooms.

Do you know how many schools, students and teachers there are currently in Nort East Syria?

The Self-Government of North East Syria consists of seven regions, namely Cizîr (Jazira), Firat (Euphrates), Efrîn (Afrin), Tebqa (Tabqa), Reqqa (ar-Raqqa), Minbic (Manbij) and Dêrazor (Deir ez-Zor). Each region has its own Education Council, which is responsible for education in the region. The Education Council is also responsible for building new schools and renovating and refurbishing old ones.

In the regime’s schools only in Arabic was taught. You have established a multilingual school system. What other differences are there between your school system and the of the regime?

Our education system is multilingual. Education in the mother tongue is the most important pillar of our system. Our goals are: Promoting democracy in society, raising conciseness for human rights and gender equality and promoting the cultures and languages of the people in the region. We work against religious extremism and promote peace, acceptance and tolerance between and within religious communities. For this reason, children are taught about all religions beginning in 9th grade. The management of the schools is democratic. Decisions are made togehter with children and their parents.

The education system of the Assad regime’s is based solely on Arabic and promotes only Arab-Islamic culture. Content is taught only from a Syrian Arab perspective. As a result, members of other ethnic and religious groups are discriminated and assimilated. The Assad regime’s political system is centralist, and the nationalist Baath Party makes all decisions alone.

Universities have also been established in North East Syria. Can you tell us something about the number of universities and the subjects that are taught there?

In addition to the universities and schools, there are many academies in North East Syria. Which role do they play? What is taught in them and who can participate in the education?

A wide variety of academies have been established in North East Syria. On the one hand, there are the Academies for a Democratic Society. These are open to society, especially to people who are active in the self-governing structures. There are also autonomous women’s academies and for example, academies specifically for teachers. This is because all teachers attend many different pedagogical, didactic and society-related courses. The purpose of the society-related courses is to build democratic consciousness among teachers. These courses in are very intensive and usually last between from 30 to 45 days.

A real revolution cannot be achieved simply by changing power or overthrowing someone in power. From our point of view, revolution means liberation from a nationalistic and hierarchical rule and ending the conditions that make such a rule possible. A revolution is successful when a peaceful, free and democratic system is established. This is not easy because the ideology and culture that the Syrian people have grown up with for decades is characterized by racism, sexism, islamism, cultural and linguistic racism. This has established an understanding that sees diversity as a threat to cohesion and uniformity as normality in society. Schools in regime-controlled areas have been and continue to be like factories for assimilation and brainwashing of the Syrian population. Moreover, the regime uses textbooks as a tool to continue its rule and Arabize all people in Syria. The regime’s decades-old education system is one of the main reasons of the Syrian brutal civil war that has lasted since 2011.

That is why we need an intellectual revolution. In self-government, especially in education, we are fighting for a democratic culture, a multicultural, multilingual society, the defense of women’s rights and freedom, gender equality, freedom of religion and belief. And our struggle against the old mentality and for a peaceful, free and democratic life continues.